Media artist-in-residence Elisa Ferrari joined sound artists Akio Suzuki and Aki Onda for a conversation about listening and sound collaboration a few hours before their performance in the grand luxe hall on October 18, 2017 at the Western Front.

Elisa Ferrari: Could you describe how you met and how your collaboration has grown over time?

Aki Onda: I had known Akio’s work for many years and respected it deeply. In 2005, I had an opportunity to perform in Osaka in a gigantic old warehouse that had been transformed into an art center [the former Osaka Harbour Red Brick Warehouse]. I decided to do a 15-hour performance over three days; and, for the last day, I invited Akio to join. Akio didn’t know me, but accepted my offer. We met on that day and performed for five hours straight. The warehouse had vibrant echoes which helped the sound to travel far distances, and because of the massive size of the space, the sound was quite different depending on your position in the room. We realized that it made more sense to move around so that we could get different variations of sounds and resonances to consume the durational hours. We placed our instruments and sound objects sporadically all over the space and changed positions often — we moved our instruments by hand, and Akio was even using a cart to carry multiple radios around.

EF: Since this first encounter, how have you decided to keep collaborating?

AO: After that event, we became friends but didn’t actually perform together for another eight years. We sometimes hung out in cities in Europe, especially Berlin. I also visited his home in Kyotango, in the Kyoto prefecture in the western part of Japan. Kyotango is well known as the birthplace of chirimen fabric. The town had a once-flourishing weaving industry which produced luxurious fabrics for kimono, although the industry has nearly disappeared now. Kimono is not popular any more, and they often import cheap fabric from China. These days, it’s a quiet fishing village. Akio moved to Kyotango from Tokyo in the eighties to build his most well-known artwork “Space in the Sun.” This was possible because the project was supported by some wealthy people there, a sort of patron—Akio was even receiving monthly payments from one of them until business declined…

Anyway, in 2013, we did a second performance, and then a tour in Europe, and both felt strong chemistry. There was natural bond. It was very easy to develop our own style quickly as we knew each other very well after maintaining a good friendship over the years.

EF: What happens when you perform together?

AO: We don’t do conventional concerts in a music venue, where the stage and audience area are separated. In these settings, the sound only travels directionally from one side to the other. Instead, we use an open space where the audience can surround us or position themselves throughout the space, depending on the occasion. It is non-directional. We also like performing at site-specific locations. Later this week in LA, we are going to do a soundwalk on the top of a hill. We will select multiple locations there, and perform at these “sites” one by one. I heard we will be able to see a gorgeous view of the city from the hill [Baldwin Hills Scenic Overlook]. It will be a dialogue between us and the environment we are in. 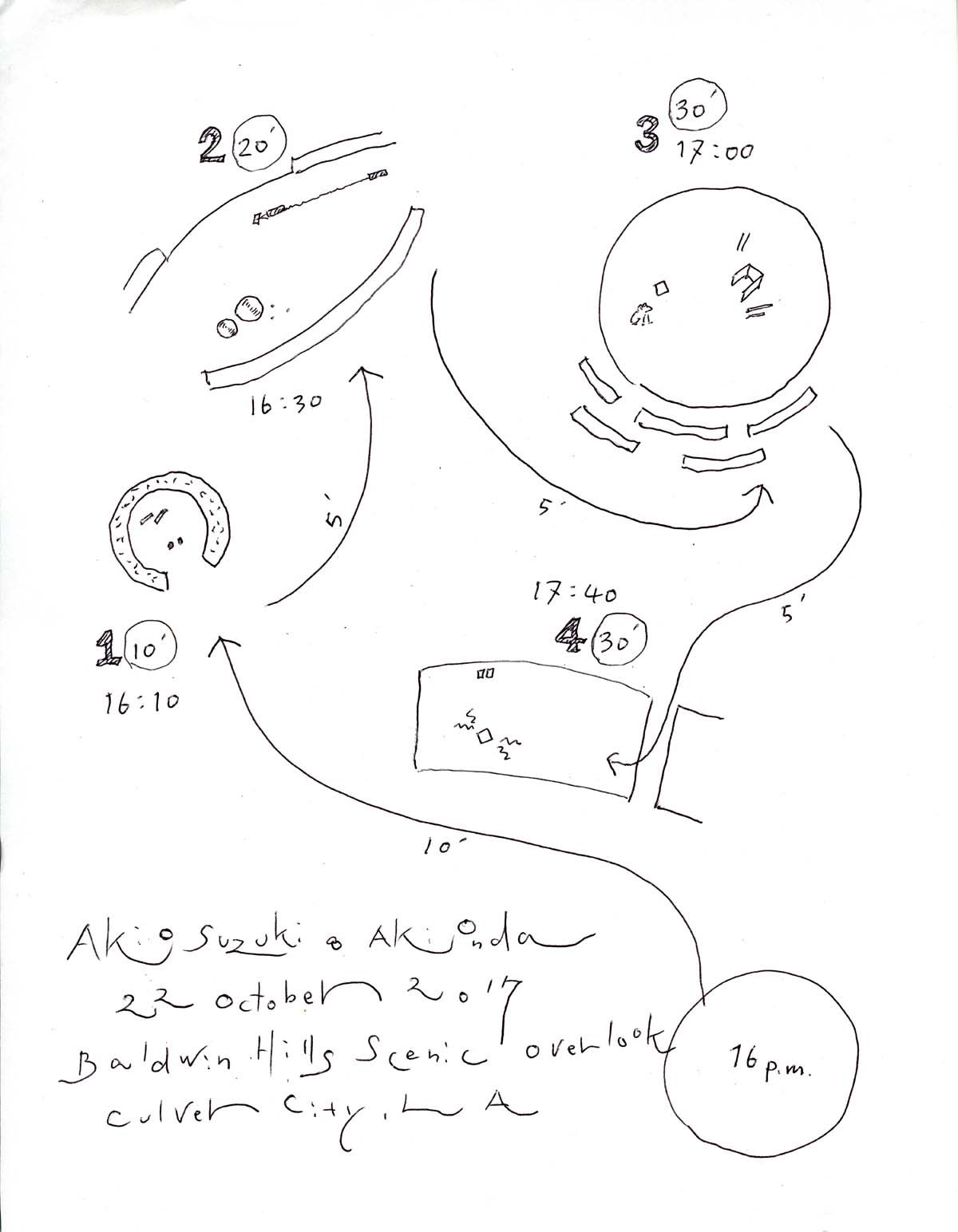 EF: When I moved to Vancouver I became interested in the work of composer and sound ecologist Hildegard Westerkamp, her affiliation with the World Soundscape Project but most importantly her soundwalking practice. It is through the practice of soundwalking that I was able to access a sonic and experiential realm that I didn’t know existed with such a depth before. Could you tell me when or how you realized the importance that listening would have had in your work and how your relationship to the practices of listening has developed or reconfigured over time?

AO: For listening, Akio and I have a tendency to perceive sound as a space, or to consider sound as always in relation to space. We usually don’t hear the sound sources as they actually are since they are always modified by the acoustics of the space and its reflections, absorptions, and attenuation. If you perform in an anechoic chamber, you can catch sound sources clearly and nearly unaffected. Otherwise, it is affected by the spatial conditions and characteristics of a particular setting. So, while we are playing, we have to carefully listen to and deal with the extra acoustics of those phenomena. Our ears have to be wide open and constantly adjusting to these ever-changing details. Here, nothing is fixed.

EF: What is the role of the audience during your performance? How does the audience either receive or contribute on an energetic level?

You mentioned “energy.” The presence of an audience dynamically changes the energy level of a space. Also, it’s interesting that if we are truly concentrated, that energy transmits to the audience. Their ears can be attentive if our ears are. In a way, we are sharing the same experience, and our minds and senses are synced if we are both engaged. 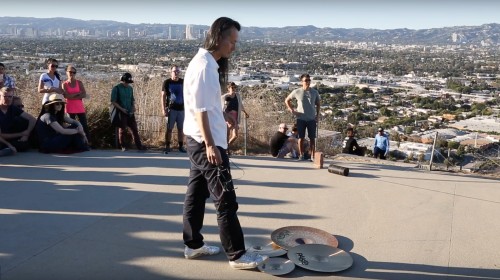 EF: This is a question for Akio. I am interested in your relationship with history. I am thinking specifically about your work with echo and how echo creates a dialectical relationship with past, present and future. What can echoes tell us about the past and/or the future of a place?

Akio Suzuki: I had a project called Self-Studies Events in the 1960s where I went into the mountains to find echo points. Each location had different echoes and no place was quite the same. I did it by myself without an audience. Immersing the body into the surrounding environment became a fundamental approach for my art. Projects such as Space in the Sun and oto-date wouldn’t have happened if I didn’t conduct these Self-Studies Events. This also led me to create the echo instrument ANALAPOS, which amplifies echoes. It’s a simple device—two metal cylinders attached on either end of a long piece of coil—similar to the shape of a toy telephone that children use, but I can make countless variations of sounds with it.

The echo has a specific psychological effect that blurs our perception of sensing time, and our fixed notions of past and present. Many people have told me over the last several decades that when they hear the sound of ANALAPOS, they recall old memories or feel something nostalgic, although that is not my sole intention for playing this instrument. I have just been exploring the process of “throwing” and “following,” which means that I make sounds and learn something from the reflection of those sounds. A sort of cause and effect…

EF: There is one quote of yours that reads: “Sound, which had been conceptually imprisoned in various spaces, is freed to circle the world.” I am interested in the idea of liberating sound through the act of listening. It is as if you are providing a new protocol for listening. Could you expand on this?

AS: This quote highlights how I felt after the experience of sitting in Space in the Sun in 1988. On top of a hill in Kyotango, I built huge parallel walls by stacking ten thousand handmade red bricks made of the soil of the land. I spent one year building this just for listening to the sound of nature for one specific day. It was the day of the Autumn equinox on September 23rd, 1988. It’s easy to imagine two mirrors facing each other to create an illusion of infinite visual space. Or, maybe you can recall the Infinity Mirror Room of Kusama Yayoi, which evokes a sense of infinity. I thought that I could apply this to the perception of hearing as well. In reality, I was listening to the reflected sounds between two walls, but in my imagination, I was listening to the eternal sound created by echoes bouncing back and forth forever. Also, one of the many reasons I choose Kyotango as the location of Space in the Sun was the fact that it was on the meridian 135° east, which is on a great geographic circle. I was imagining the sound circling the earth, almost like a grand notion or a model of the world. Space in the Sun was a conceptual piece after all.

EF: Aside from your instruments do you have some kind of structure or “score” or moments of synchronization?

AS: We just improvise when we perform at a venue. But for a site-specific performance, we do a site-visit and, as in this case, we often plan what we do meticulously and write a score.

AO: But just to be clear, it’s not necessarily so-called “improvised music.” Let’s say this is “expanded music” that pushes various boundaries to find alternative possibilities. Today, we have been working long hours since the early morning to set up our gear in the Western Front’s Grand Luxe Hall. We are going to use self-made instruments made of various materials, analogue equipment such as tape recorders, radios, and other found objects, all placed either on tables or directly on the floor. The placement of all these materials were carefully arranged for appealing to the visual perception—with a hint of various techniques common to installation. This visual arrangement also works as a sort of score too, and visually suggests different combinations of the instruments and objects Akio and I use. Since we perform together quite often, there are certain combinations we use, but either of us can change the course and reveal a new synthesis of sounds. The combinations change in response to the space as well. So, yes, there is a structure, but we keep it as elastic and fluid as possible.

Thanks to: Aki Onda and Akio Suzuki for taking the time to answer my questions; Róisín Adams for the invitation; Gabi Dao for her technical support, Emma Metcalfe & Ruimin Li for the Japanese-English transcription and translation, and Stacey Ho for proofreading.